When it comes to online gaming, Littlebigsnake.io is one of those games that you must try out. Online gaming has advanced to a stage where every game is taken with great zeal and enthusiasm. Most of the games have been a renovation of a nostalgic game that you used to play in the past. This generates even more interest in the game as you can relate it to your childhood days. As a matter of fact, internet gaming has become a popular medium to pour out new fun games based on old concepts. Littlebigsnake.io is one of those games that you should play in your spare time.

Littlebigsnake.io is one of those games which have been established on the concept of slither. If you are a fan of Slither.io, you should give this game a chance. It has no complications whatsoever. Being a very easy and simple game, it has seen a huge growth in popularity in the past years. The controls are as simple as they can get. Slither is a snake game that requires you to control a snake and make it grow as the game progresses. Littlebigsnake.io has a much similar concept. For a bonus, it is a multiplayer game with the same objectives.

It is obvious that to excel in a game, you must understand how to play it. As soon as you have the idea, you can cross each and every restriction without any sort of difficulties in Littlebigsnake.io. In this game too, you need to control and grow your worm into a gigantic snake. The important point is to protect it from any sort of attacks or blockages. Even if you are a big snake, a small worm can take you down. You should be aware of your surroundings while eating and growing with consistency.

As a matter of fact, this game requires your least bit of effort. You do not require any keyboard to control your snake. You just need your mouse to do the trick. While the controls appear to be easy, your mind must be sound to intercept any dangers to your snake. The fact that your size doesn’t matter, makes the game even more interesting. You need to be flexible with your movements and the rest would be taken care of. These points have made Littlebigsnake.io one of the most loved snake games on the internet. 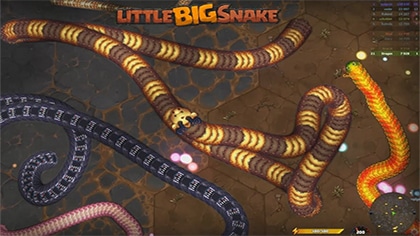