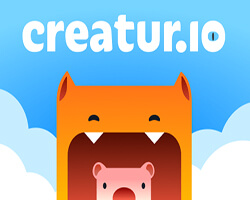 If you’re looking for a game, after a heavy day at your office, it is better to play some light games. If you are fond of playing cards with your mates, you must be loving the multiplayer genre of games. Thus, you should definitely try out creatur.io.

The game of creatur.io is all about dominating and arena. You will be presenting a particular character within the game. The character will have to feed on a number of small food items scattered throughout. On consuming the food items, the player will grow big. At the same time, the user can also kill a number of other players. While killing the other players, it should be noted that the other players should be smaller than the user. There are also other aspects of the game, you should know.

While you start playing the game, you can grow up, and proceed with a different character. Once you reach a particular score, there will be an option for evolution. There will be 3 to 4 options for evolution. Each of the evolutions, which you will get will have a certain power. In one case, you might get a better speed. You can even get the ability to kill other players efficiently, with a different evolution. From time to time, you should try out all the possible evolutions in creatur.io, in order to know the powers.

When you start killing other players or start consuming food, your score will increase. As your score will increases, your rank will also get better. Your objective will be to reach rank one on the leaderboard. Reaching rank 1 is very difficult at the beginning. But as you start playing creatur.io, you will definitely go close to it. As more experienced players come to the arena, the game will become more challenging. You should practice the game a lot in order to perform better. The game is also available on a number of mobile devices. You can download the game on your devices in order to play the game, while on the go. You can control the character with your mouse, by moving it, and there are no other special controls.