Kugeln.io is a shooter .io game that involves the battle between the characters of the balls. The aims of the game are to kill all enemies and earn points along with the best killing rate. There are indications that players will be able to see bullet and health rates on their screens. Players can change the skin of their character by request. In addition, players have the chance to design a special character from the helmet and glasses options. There are 3 game modes in spinz.io which are deathmatch, team deathmatch and capture the flag. Besides, there are different map types such as winter, desert, spring. Players can fight privately with their friends by opening a private room. Kugeln.io has sound effects but it can be turned off if desired.

You must use the A and D keys to walk your Kugeln.io character and use the space bar to jump the character. Mouse right-click for grapnel and mouse left click to shoot. You can also use mouse directions to get the target. If you want to change your weapons, you should use the scroll.

At the beginning of the game, all players have a pistol and bow. Players must collect advanced weapons to kill the enemies in the game. The number of bullets in spinz.io is limited, so you should use the bullets in your gun carefully. If your bullets are finished, you should get new weapons to reload your clip. There are fixed machine guns that are very strong to kill enemies. Besides, when your health ratio falls too low, you can increase the health rate by collecting the heart’s symbols. In addition, all the sharks eat you if you fall into the water. As multiple enemies attack you, you should move an area whenever possible instead of falling into the water. 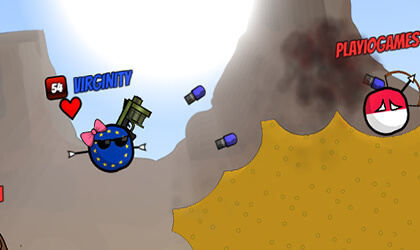