Fidget spinner has earned a lot of popularity in the last few months, and if you are looking for an online game, which is associated with a fidget spinner, you should try out the Superspin.io game, which is a blend of fidget spinner and the game slither.io. The objective of the game is almost similar to the other games of the io family, where the big players dominate the small players, but there are a few changes that have been made in the Superspin.io game.

Players need to use the mouse to move on the game area. If players want to increase it fidget spinner’s speed, they should press the mouse left click. Also, the best part about the game Superspin.io is that you can change the look and feel of the fidget spinner by clicking on the “Customize” option below the nickname area. You can change the color of the fidget spinner, and to choose a new color, you will have to click on the desired color on the color palette on the right side of the screen. Apart from choosing the appropriate color, you can also choose the desired icon from a list of various icons, which are available at the store. You can also represent your own country by choosing the flag from the list. 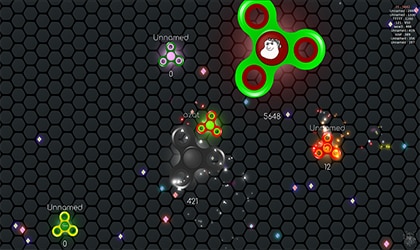 Page load link
We use cookies to ensure that we give you the best experience on our website. If you continue to use this site we will assume that you are happy with it.AcceptSee Detail
Go to Top