The Gotia.io game is one of the most interesting games where you can choose from various kinds of knights and players. Join in the battle and play the game with your favorite weapons, defeat the other players and win the game. You can take down on bigger players by cooperating with the smaller players. Be prepared with shields to avoid getting killed in one strike. Players that are really big will also give you a powerful bounce when you run into them so it is convenient to have a horse in order to ride back within striking distance faster. If you follow the strategy of the Gotia.io game, then you would surely win the game easily. Choose from various kinds of knights and soldiers to play with.

Use the mouse to steer your knights. Press the mouse and the space bar. There are two kinds of power-ups in the games which comprise of shields and horses. The shields will help take the damage by 50% and the horses will increase the speed by 50%. You can also get various kinds of power-ups by walking over the knights. The power-up button will be active for 20 seconds.

Stay away from all the bigger players as they would fight all alone in the Gotia.io game. You need to attack players who are of your size and even smaller. Smaller players would be swift and fast and it is difficult to catch them as well. You need to have a horse in order to catch them and defeat them. You also need to have a shield in order to take less damage in the game. 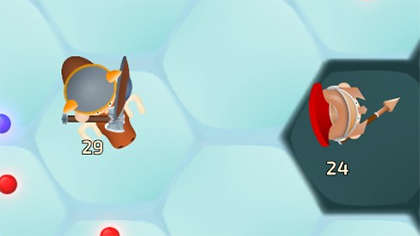