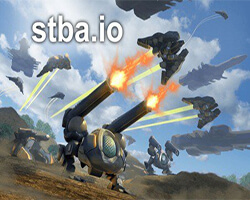 Stba.io is one of the best online multiplayer games that you would love to play with your friends and family. Step into the battle field with a large selection of powerful units that can level up and upgrade based on the kills that you get.

Play amidst Futuristic hover tanks, bombers, and fighter jets and start the game as a basic unit like the Javelin or the Manta. You can also increase your count of killing to unlock more advanced units like the Harpy and Gladiator. You can even kill more people to unlock various super units like the enormous flying battleship and the Ion Cannon! All the teams would start with a limited number of supplies and whenever you kill an enemy unit, there would be a new enemy unit in its place and the supply ticker for the enemy team would automatically dip down.

If the supply already reaches zero, the bases defences explode and the Command Center is susceptible. You would need to work as a team to destroy your opponent enemies and their Command Center before the enemy destroys yours

The game uses the movements like the WASD keys. Some units, like the Gladiator, have alternate guns which fire with right-click, but most units just have primary weapons which fire with left-click. All the units have one ability which is hot keyed to the number keys. Zoom with the mouse wheel.

Your main goal in this game is to stay alive as much as possible so that you can level up in the game. You need to switch to more powerful units when you’ve reached a high enough kill count. Always focus and keep track of the all the command centres health by looking at the bars in the top middle of the screen. If your teams supply gets depleted and you can again get back to the command centre and defend the same. This game is one of the most interesting online io games that you would love to play with friends and family as well. 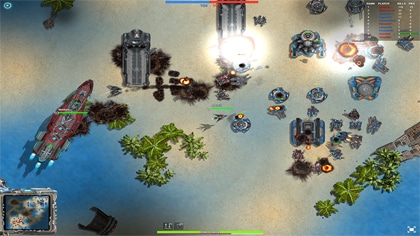