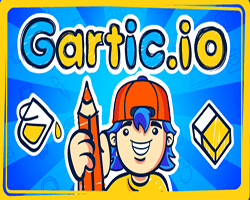 There are some people, who have great powers of imagination. If you are one of them gartic.io is one the games, which you should always try once. The game is simple to play, and is quite addictive, which are the biggest reasons behind the popularity of the game.

The game of gartic.io is quite simple, and even kids can play the game, without any issues. This game is all about guessing, and if you have good guessing capabilities, the game is for you. In the multiplayer game, there will be a limited number of participants. Each participants of the gartic.io game will have to guess the drawings. At a particular time, each player will draw something. The other players will have to guess, what is being drawn. On correct imagination, the player will get points. Thus, the game objective is very easy.

Once a player starts the game, the player will have to enter a nickname. On entering the nickname, the game will start. When the turn of a player comes, there will be a drawing board on the screen. Before the drawing, the player will have to mention the thing, he is drawing. The name of the drawing will be reserved by the gartic.io server, and it will be compared with the answers given by the players. The players, who give the correct answer will get some points. After the completion of the game, the player with maximum points will win.

A player, who is answering, or guessing, will get multiple chances to give the answer. If the player give the correct answer on the first try, he will get maximum points. The points will be reduced, on trying the answer a number of times. If any player gives wrong answer, no points will be assigned to the player. But there is no negative marking in the game. In the game, there are some rules, which should be followed. The user, who is drawing pictures, cannot draw any kind of symbols or alphabets. If such kind of things are drawn, it should be reported. With the rules and the simplicity, gartic.io is one of the best multiplayer games. 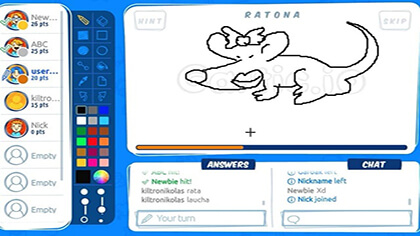