MooMoo.io is a game of farming and fighting other players. The aims of this game are to build the most powerful and most resourceful castle, to have the most gold and other raw materials which are food, wood and stone. One of the most important features of this game is the ability to develop your own character at different classes. Your moomoo.io character can use an ax, a sword or a bow. You can have gold weapons like gold axe or gold sword when you have a lot of raw materials. In addition, the player who kills the most people is given the killer icon. There are different hats in the game which provide different features to your moomoo.io characters such as extra speed, attack power, health and so on . Most of these hats are necessary to buy and you need to collect gold for it, but some are free. There is a correspondence feature in the game, so you can communicate with other players. The game has also clan system ,so you can build your own army and be stronger.

Players can move their characters with WASD keys in the game. You must use mouse movements to turn your player in different directions. You must press E button to shoot or fire automatically.

All players need to collect raw materials to develop their characters and castles. There different ways to collect raw materials in moomoo.io. You must cut the normal trees to collect the wood. For stone gathering, you must break the surrounding stones. Also, there are 4 ways to multiply your amount of gold by building windmills, killing animals, digging gold or killing other players.You have to cut fruit trees or kill animals to collect food. When you have enough raw material, you can build a powerful castle because the best way to defend yourself against enemies is to build your own castle. It is always safer to build it into the ending parts of the map when building the castle. There must be things in the castle that you can certainly gather raw material like tree, fruit tree and stone. Besides, the stone walls are stronger in defense than the wooden walls. In addition, you should not forget to place turrets behind your walls. 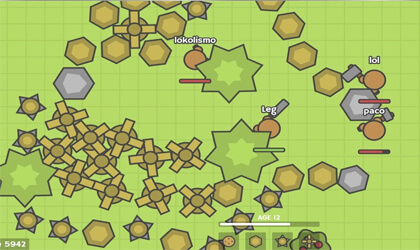