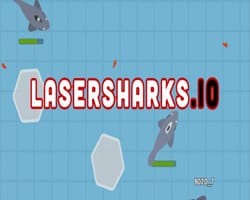 One of their top games is the lasersharks.io which you can play throughout the day without getting bored. As the name suggests the game is about a survival strategy and the main aim would be to keep your player alive and active on the gaming map as long as you can. You have your attack options and you have to dodge the attacks from others. The game is pure entertainment and you can learn a lot about your gaming skill in this game. The players can master their concentration and power to focus on certain things when they are playing this game over the internet. The aim of the players gets the first rank on the leaderboard which shows the top 10 players according to their scores.

Lasersharks.io has quite simple moving and attacking controls. If you want to turn your shark in another direction, you can use the mouse to navigate. Also, when you want to speed up to catch other sharks or escape from them, you should keep the mouse left click. However, you need to have enough energy to speed up your shark. You can make a laser shot with the space bar key to kill enemies and earn points.

The lasersharks.io is a very highly competitive strategy based game and you can easily play it any day you want to. The game is very simple and hence it can be downloaded very easily without any hassle. For the players who are new to the gaming interface, the game can prove to be difficult. You can play the game in single player mode or play it with friends as a team. There can be four players at most when you are playing the game in team mode. The lasershark is one of the most played games produced by the io games. 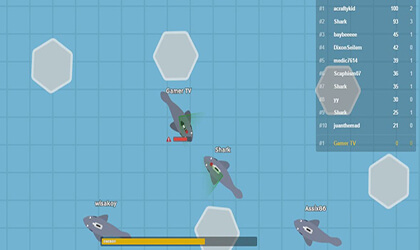