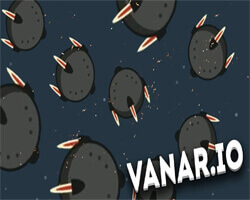 Multiplayer games are always popular among all kind of gamers, and if you are looking for a new kind of multiplayer game, you can start playing vanar.io. It is a game, where you will have to control a tank, and shoot other player out of the arena. The game is similar to a number of other fighting games, which you have already played, but the following one is quite difficult, and you need a lot of skills to play the game and reach the top of the leaderboard. You can also collect a number of objects, which are available in front of you, while playing the game.

Once you start playing the game, you can use the arrow keys to move in front, towards the back, left or right. The buttons W, S, D, A will also do the similar tasks. You will have to hit the spacebar key to shoot missiles and the shift key to turn the shield on or off. Thus, the controls of the game are quite easy, but killing others in the arena requires a lot of patience and practice. The game is only available on the website, and thus, for playing the game on various platforms, you will need a supported web browser.

After you visit vanar.io to start playing the game, you will have to enter a name for yourself, and choose the server, where you want to play the game. There are two servers, the USA East, which will be selected by default and the Europe server. It is better that you choose the server with a maximum number of players to enhance the fun. But, if you are new to the game, you should choose the server, where the number of players is less. After you select everything, you will have to click on Play to start playing the game.