Arcade games are always popular among a number of players, and is one of the most popular genres among many. If you are fed up playing a number of arcade games, you should try out pikes.io, which is quite popular nowadays. The ease of gameplay is another reason behind its popularity.

Sword is considered to be one of the most popular weapons in order to kill others, and that is the weapon, which is used in pikes.io. The gameplay is quite easy, and can be done with the help of the mouse. Depending upon the device, where you are playing the game, the controls are different. In case of a computer, the mouse is the most important control device for the game. Though, with the help of the keyboard, you can control, but that is not efficient.

In case of a computer, it is very easy to use the mouse for navigation purposes. As you move the mouse pointer in various directions, your character in pikes.io will also move accordingly. In order to attack, kill other players, you can use the left mouse button. After you click it and every player, your score will be added, and more the score, the better will be position in the leaderboard. In order to move towards the top of the leaderboard, the time you survive within the arena also plays an important role. The score and the time you survive on the arena will be displayed at the top left corner of the screen.

In case of using any controller, you can use the joystick on the controller to move in various directions. The same is applicable in case of the mobile devices, where you will have to use the navigation key, which is present at the left corner of the screen. There is a small button on the opposite side of the joystick in pikes.io, to kill the players. You can use any other key on the controller for the purpose of using the sword. Thus, the control of the game is super easy, and you can play the game easily on the go. 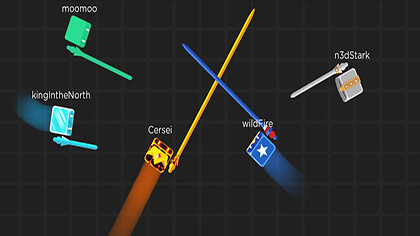