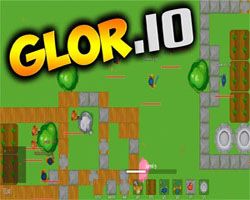 Glor.io is a new generation .io game that inspired by ancient war games. The aims of the game are survival, building base, fight with opponents. In this game, you will need some raw materials which are wood, stone, food and gold to build your own castle and army. You have to cut the tree to increase the amount of wood, crush stones to increase the amount of stones, kill animals to compensate your food needs. However, you need to build a tower which requires other raw materials in order to supply your gold needs. An easier solution to fulfill your food needs is to plant beds instead of killing animals.

You can move your character with WASD keys and attack by left mouse click. If you want to use chat system, you need to press Enter button.

You can build your own castle by building walls and gates in order to protect from enemies. In addition, there are two wall types which are wooden wall and stone wall. The differences between them are resistance against attack and raw material requirements to build but the number of wall constructions is limited by the game. You must build your army to protect your fortress and your own territory. The people forming glor.io army are guards, peasants, mercenaries. Guards protect area where they are in. Peasants collect the raw materials that are close to them. Mercenaries follow you and protect you from enemies. Also, the stone of life provides that you will again give birth in the same place after enemies killed you. It would be a logical choice to set up the stone of life inside the walls that you set up. There is a party system in the game. Hence, you can play in the same game server with your friends by creating a party link. 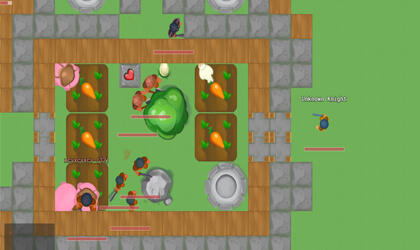